So as fabulous as my blue silk roundgown looked on its own, it was NOTHING without my fabulous hat of fabulosity.

I mean really. Look at it. 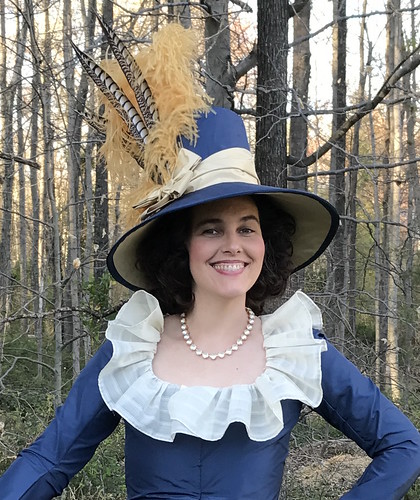 As I was trying to figure out how to make this hat, I scoured the internet for resources on how people have made hats like this. I couldn't find any (though I found a lot of great resources that helped me with technique. Namely, this one from Dressed in Time and this one from American Duchess.) This is my first structured hat and my first hat made without a pattern. So here goes the Complete Noob Guide to a Fabulous 18th Century Hat.

I started with finding an inspirational image. I wanted something different from the typical Gainsborough style portrait hat and I knew I didn't want to do anything with straw. The dress I was making required something more formal than that. These two images served as my major inspiration. 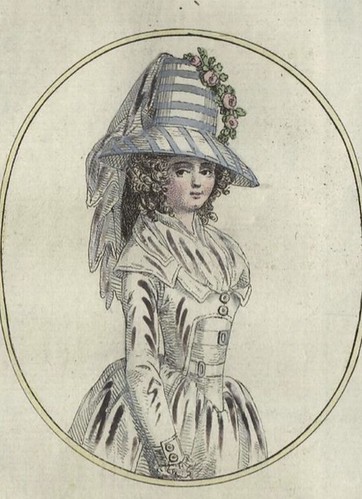 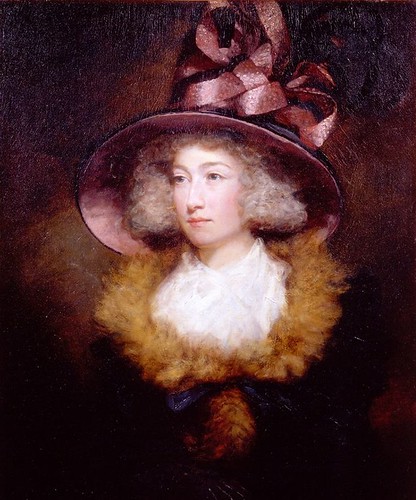 I love the lampshade brim and the tall crown. Plus, it seemed like something structured enough to fit the period look I was going for while being simple enough for a complete hat idiot like me. I went to Michael's Crafts and bought a bunch of poster board. Trial and error gave me a pattern that looked like this: 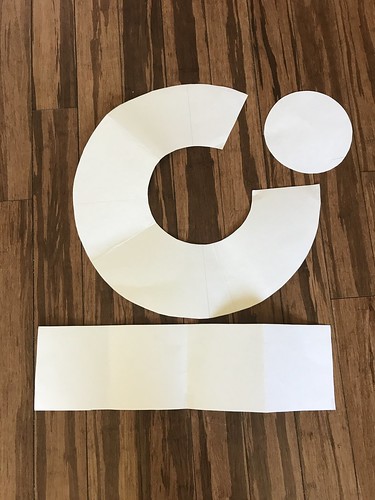 The crown was way too high and skinny on the first mock up, but the second mock up was a winner! 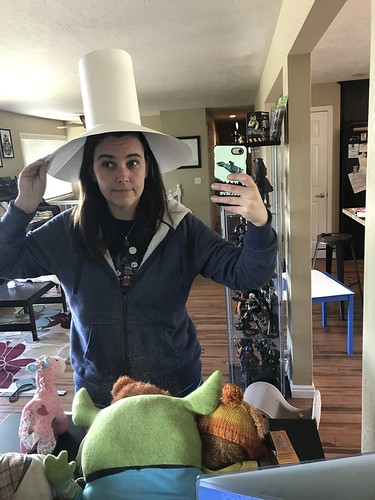 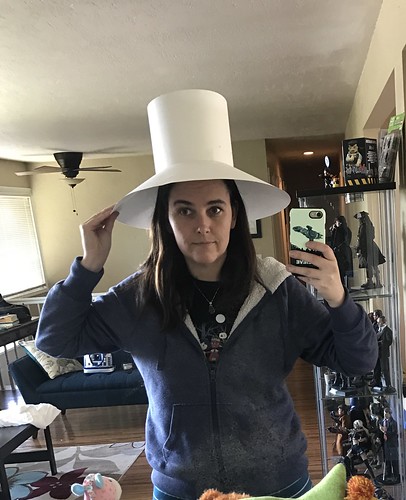 I had purchased buckram in anticipation of all the amazing hats I was going to make back when I first started going to costuming events *cough*circa2005*coughcough* so I didn't go with the needlepoint canvas that the tutorials I looked at recommended. Once I was happy with my pattern, I cut out two of each pattern pieces from the buckram. I also had multiple yards of green wool felt that I had purchased for a British Rifleman uniform way back in the day (I have since realized that FELT was not the right kind of fabric for that long dead project...) so I used that as well.

Now, here's a word of wisdom for anyone looking to make a hat like this. DO NOT glue your buckram layers together. My buckram was pretty thin and flimsy so I thought it would be great to use some spray adhesive to double the layers. This worked fine when the layers were flat, but once I started shaping them into a 3-dimensional hat, the buckram quickly buckled and created bubbles that even the felt couldn't hide. Were I to do it again, I would pad stitch or baste the layers together.

I sewed my shapes together and once that was done, I used floral wire from Hobby Lobby to wire the top and bottom of the crown and the edge of the brim. The wire was attached with a very thick carpet thread and was whip stitched into place. 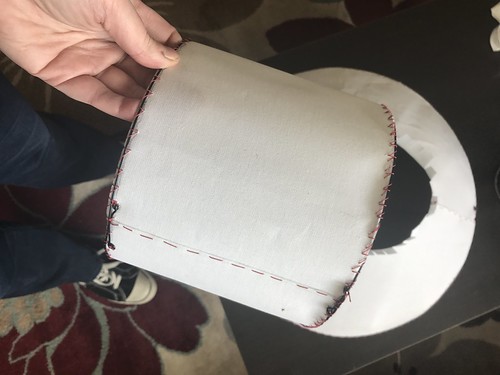 Now, because I like to live on the edge, I only glued the crown to the brim instead of sewing it. I figured that sewing the fashion fabric into place would be enough to hold it on. Time will tell if that was a good plan or not. 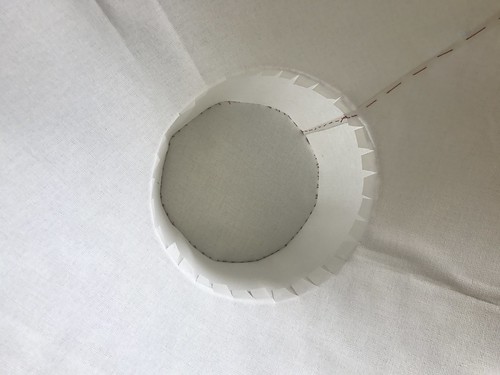 Ugh. Look at the buckling on the the brim.

Then came felt. To attach the felt, I put down lines of Tacky Glue then smeared it around with my fingers and smoothed felt over the wet glue. I only did a small section at a time so I got everything as smooth as possible. It was messy but it worked! 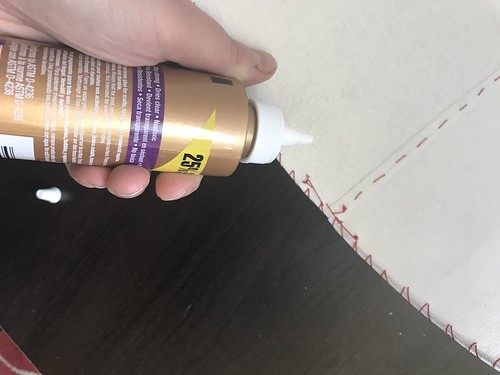 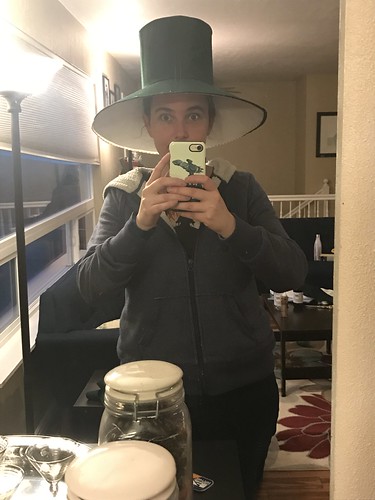 I'd noticed as I was stitching wire into place, the top of the crown had gotten a bit concave. The felt didn't quite create enough padding to hide this so I put a layer of batting in between the felt and the silk that ended up covering that. It worked out okay and the hat is so tall that no one will see that it's slightly lumpy. 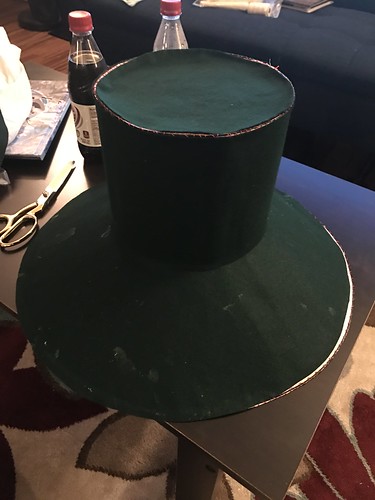 This is the part where my in progress construction photos get a little sparse. I was only able to pin the batting and the silk down on the top of the crown before I had to get on a flight to go to the event at which I'd be wearing the hat!

This is what it looked like at the Dallas airport. I got a lot of questions about it from many curious passengers, gate agents, and flight attendants. Goes with the territory, I guess. 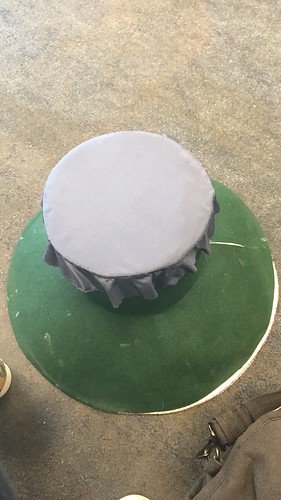 Once at the hotel, I cut out the other silk pieces and started the process of covering the whole thing with the silk. The silk covering the brim was stitched on with running stitches at the outer edge and inner edge. The silk covering the crown was whipped to the silk on the top of the crown. I made self bias tape from the blue silk and bound the edge of the brim with it in two steps: I attached it on the inside with running stitches, flipped the tape over the wire, and then whipped the tape down to the top of the brim. It works, but I might take those stitches out in favor of less visible stitches. I probably never will - I'm nothing if not lazy.

The decorations are pinned on and consist of a wide rectangular piece of the gold silk that I wrapped around the crown, a smaller rectangular piece that I shaped into a bow, and the best feathers I could find for cheap online. The first time I put the completed hat on my head, all of the trial and error, last minute sewing, and frustration melted away. 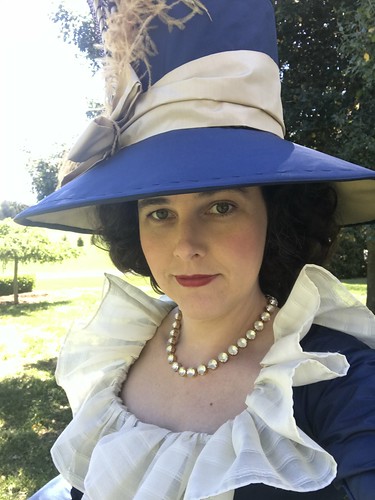 I learned several important things along the way.

1. Seriously, DO NOT glue buckram layers together.
2. I need to invest in some curved needles. I could have saved myself a lot of headaches.
3. I don't care how cheap you are, use silk thread for sewing on the fashion fabric.
4. Hats cannot be made without a LOT of Diet Dr. Pepper.
4. Hats aren't that scary and I might actually kind of enjoy making them!
Posted by Ms. Sara L at 2:09 PM